There are so many festivals in India, and Holi is the most loved one of them. Color is bliss in India, and there is nothing better than the vibrant, playful, and joyous colors of Holi. Apart from the colors, there are rituals and customs of celebrating Holi in India. Pour yourself with the Holi drinks like Bhang and Thandai, dance to the Rajasthani Holi songs, and watch the traditional dance- Gair! 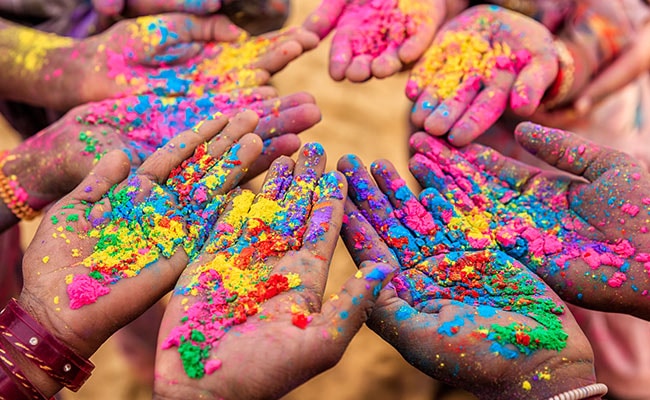 Want to know more about the Holi celebration in Rajasthan, the meaning of Holi, and more? Let us guide you on how to celebrate Holi in Rajasthan 2021.

Why Holi celebrated in Rajasthan?

Symbolizes the triumph of good over evil; there is two mythology about the celebration of Holi.

There is a story about the Hindu god “Vishnu” and his devotee “Prahlada”. The main reason for the celebration of the festival of Holi is a victory of good over evil. On this day, Hindu god Vishnu became Narasimha – half-human and a half-lion to kill the Hiranyakashyapu and save his devotee Prahlada.

When is Holi celebrated in Rajasthan?

The ending of winter and the beginning of spring is the month of Holi. This year’s Holi celebration is going on 28-29 March 2021. Holi festival is celebrated in 2 days- first is ‘Holika Dahan’ and the second is ‘Rang wali Holi’ or ‘Dhoolandi’.

Holika Dahan is the first day of the celebration. Holika dahan starts at night, which is Holika Dahan.

According to the Vishnu mythology, there was a powerful king named Hiranyakashipu. Hiranyakashipu used to consider himself to be God. He wished that everyone in his kingdom worship him. But his son Prahlada was a devotee of the Hindu god Vishnu. Hiranyakashipu tried many times to kill his son as Prahlada refused to worship his father. So one day, the king called his evil sister, Holika – who was immune to fire to get rid of Prahlada. She tricked him to sit with her on a bonfire. Unfortunately for Holika, her powers became ineffective, and hence, she burned to ash. On the other hand, Prahlada gained her immunity and was saved from the fire.

Every year, on the first day of the Holi festival, everyone lights a bonfire to symbolize the victory of good over evil.

When Lord Krishna was a kid, he drank the poisoned milk of the demon Putana. After that, his skin turned blue, and he felt sad about this. Radha was fair, and Krishna was concerned that fair-colored Radha would ever like him or not. One day, Krishna’s mother told him to cover Radha’s face in any color he wanted. After that day, people have been dowsing one another in color on the festival of Holi.

How can I celebrate Holi in Rajasthan 2021?

Holi is celebrated in many countries by almost every religion, and this is the festival of love. Visiting Rajasthan for the celebration of Holi become glorious and vibrant. To celebrate Holi in Rajasthan 2021, there are 5 cities in Rajasthan, which are famous for their Holi celebration in the world!

Celebrate Holi in Pushkar, watch the famous Gair dance, dance on the traditional Rajasthani Holi songs, watch elephant festival in Jaipur, celebrate Holika Dahan with the royal family in Udaipur, and what not!

Check out the 5 places to celebrate Holi in Rajasthan 2021.

Holi in Pushkar is in the Rajasthan state, is the perfect place. Thousands of people from other cities come to Pushkar to celebrate Holi. From foreigners to the locals, the Holi celebration in Pushkar is the chance to meet new people and make friends. Celebrating Holi in Pushkar is safe, and experience the wholly authentic experience.

Book a camel ride in Pushkar to enjoy a camel safari. Visit the Bharmha temple, Pushkar Lake, and Savitri Temple. Fill your cravings with the authentic and traditional food in Pushkar. Explore the local market of Pushkar and streets full of amazing things.

In the Mali community in Ajmere, there is a tradition that men throw color on women, and women respond by hitting them with a bamboo stick. The tradition is known as the ‘Lath Maar Holi”.

‘Gair’ is a traditional dance in Rajasthan. On the Holi, amidst the gulaal, locals come together and play Gair with Rajasthani Holi songs. Visit Ajmer to enjoy Gair Holi and Mali Holi, which both are fun.

Jaipur is a beautiful place, and there is an Elephant Festival held in Jaipur. On Holi, elephants taken out, decorate, and you can watch them on the streets of Jaipur. The festival ends with the colors by playing Holi with colors.

Members of ‘Harsh’ and ‘Vyas’ communities traditionally plays Holi for the past 300 years. Everyone throws water at each other back from a vessel called ‘dolchi’ made from camel skin. It is said that when the two communities had a dispute over food, and the men of the communities started throwing water on each other. After that, this got converted into a tradition.